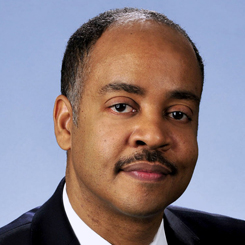 Michael Jones-Bey serves as the Director for Con Edison’s Supplier Diversity and Sustainability Program. He is responsible for leading the company’s efforts to incorporate sustainable Supply Chain business practices while increasing contract opportunities for Minority and Women-owned business enterprises (MWBEs) in ways that strategically support the company’s commitment to environmental stewardship and promoting economic growth within the communities it serves.

Prior to joining Con Edison, Michael served as Executive Director of one of the nation’s largest public-sector Supplier Diversity Programs, where he was responsible for revitalizing the New York State certification program, agency compliance, and business development initiatives. Targeted industry sector capacity building and market access programs resulted in hundreds of millions of dollars of additional contract opportunities for MWBEs in the construction, renewable energy, and information technology industries. New opportunities in the financial services industry surpassed $1 billion. Michael also spearheaded the State’s disparity study and worked on historic legislation to create one of the strongest MWBE laws in the nation. This legislation has made it possible for New York State agencies and authorities to more than double MWBE expenditures.
Michael is a champion for corporate sustainability and a leading proponent for recruiting talented minority and women entrepreneurs into the energy industry. His work has been recognized nationally. He has received over 20 awards from the public and private sector. Michael earned a Bachelor of Science Degree in Business Management from Northeastern University. He is married, and the proud father of a 14-year-old son.

Orange & Rockland Utilities, Inc. (O&R) is located in the northwestern suburbs of New York City, our electric and gas service provides energy for 745,000 people in six counties in New York and northern New Jersey. Founded as the Rockland Light & Power Co. in Nyack, NY in 1899, we merged with Orange and Rockland Electric Company in 1958 and became Orange and Rockland Utilities, Inc. With our subsidiary, Rockland Electric Company, we became wholly owned by Consolidated Edison, Inc. in 1999.

Consolidated Edison of New York, Inc. operates one of the world’s largest energy delivery systems. Founded in 1823 as the New York Gas Light company, our electric, gas, and steam service now provides energy for the 10 million people who live in New York City and Westchester County.

We’re constantly looking toward the future and exploring ways to innovate and take advantage of developing technology. But, more than anything, we’re listening to you and working hard to give you cleaner, more efficient energy choices, and more control over when and how you use your power.