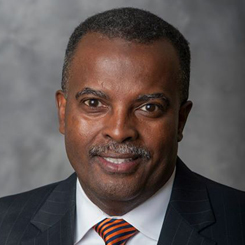 Board Member, SDDC
Founder, President and CEO of the AACCNJ
Company Website

Mr. Harmon holds an Associate’s Degree in Business Administration from Mercer County Community College and Burlington County College, and holds a Bachelor’s Degree in Business Management, Fairleigh Dickinson University, 1983. Mr. Harmon also successfully completed a one year Fellowship on Regionalism and Sustainability sponsored by The Ford Foundation and a Minority Business Management Seminar at the University of Wisconsin-Madison, in 2009. Mr. Harmon completed a four year Chamber Executive Management Program, at Villanova University, sponsored by the U.S. Chamber of Commerce, in 2014.

The AACCNJ performs an essential role in the economic viability of New Jersey. While providing a platform for New Jersey’s African American business leaders, to speak with a collective voice, the AACCNJ advocates and promotes economic diversity fostering a climate of business growth through major initiatives centering on education and public policy. The Chamber serves as a proactive advocacy group with a 501(c) 3 tax exemption, which is shared by the National Black Chamber of Commerce.

The African-American Chamber of Commerce of New Jersey has been incorporated as a 501(c)(3) in accordance with the Internal and provides advocacy and support for businesses throughout the State of New Jersey.